This has been the busiest and most hectic couple of weeks I can remember. In our Christmas sale I decided to put on sale 6 octagonal barrels. There were 3 of us taking phone calls. When I hit 6 I walked over to the gun shop and Colleen and her helper had both taken 6 each, so we sold 18 instead of 6. The same thing happened with the sale of TC barrels, instead of 5 barrels we sold 21. We sold over 30 of the Positive Performance Packages, about 3 times more than we planned. So we are swamped with trying to get these Christmas sale items done and out to you. In the last 4 weeks we have finished almost half of them so be patient. Yours is coming.

Then add to that over 6 feet of snow in the last 2 weeks and we are still digging out. It is not unusual for us to get that amount of snow. We live at 8000 feet elevation but to get it when the weather bureau predicts 24” is a bit rough. But that is my fault. The weather bureau is NEVER right up here. When they say flurries, we get 3 feet of flurries. Typical. The only job you can have and be wrong 100% of the time and still keep your job.

Lots of items on display at the recent SHOT show. Unfortunately many of the manufacturers and distributors are pulling out of the show and having mini SHOT shows for dealers only, no brothers in law and his beer buddies allowed. Colleen went to one a couple of weeks ago and said it was like the old SHOT show used to be. Plenty of time to talk to the sales people and to manufacturers and place orders. She talked at length with Steve Hornady and his son Jason.  Steve has long been a good friend and a great person he is. A true gentleman. We built the very first 17 HMR revolver for him years ago. He asked what did he owe us. I told him not a penny as I enjoyed the experience. A few days later UPS brought me a couple of his new progressive Lock n’ Load presses. That is the kind of gentleman Steve is.

Speaking of real gentleman, one of my favorites is Lee Jurras. Lee pretty much got me into this crazy business many years ago. I was still in radio and would be for another 7 or 8 years but I would call him endlessly and pry knowledge from him about things I was short on. He never told me to get lost although I am sure he wanted to.  Lee has cancer that is spreading rapidly and will go to his maker way too soon. About 8 weeks ago we were talking about revising his Howdah series of custom single shot pistols and he asked me to do him a favor. I asked him what did he need. He asked me to build a Lee Jurras Memorial revolver, with his date of birth, 1934, and his date of death, 2017. I tried to shy away from that as just the thought of it bothered me. But he wanted it that way, so I built the gun for him, serial number 001, a 7 ½” 475 Linebaugh. A week or so ago he went to the range with his friend Jerry Moran. Those of you over 50 should remember Jerry. He was the man to go to for Colt Python work. He could slick up a Python like nobody else.

Lee and Jerry went to a range there near where Lee lives in Indiana and Lee shot the 475. I was afraid it might be a bit too much for him, but Lee shot several rounds out of it and enjoyed it. I hope to finalize the details of the  revision of the new Jurras/Reeder Howdah pistols soon. We have gone over the calibers and other details of the guns. I want to make sure Lee is satisfied with the way I hope to build them and the calibers but that will be up to him. I mentioned some of the new calibers I planned to chamber them in. I wanted 5 or 6 calibers and maybe 5 guns in each caliber. Lee stopped me and said he liked the ballistics of my 356 GNR and let’s start with that and work up. So we have a beginning. From here it will be largely up to Lee, so we shall see. 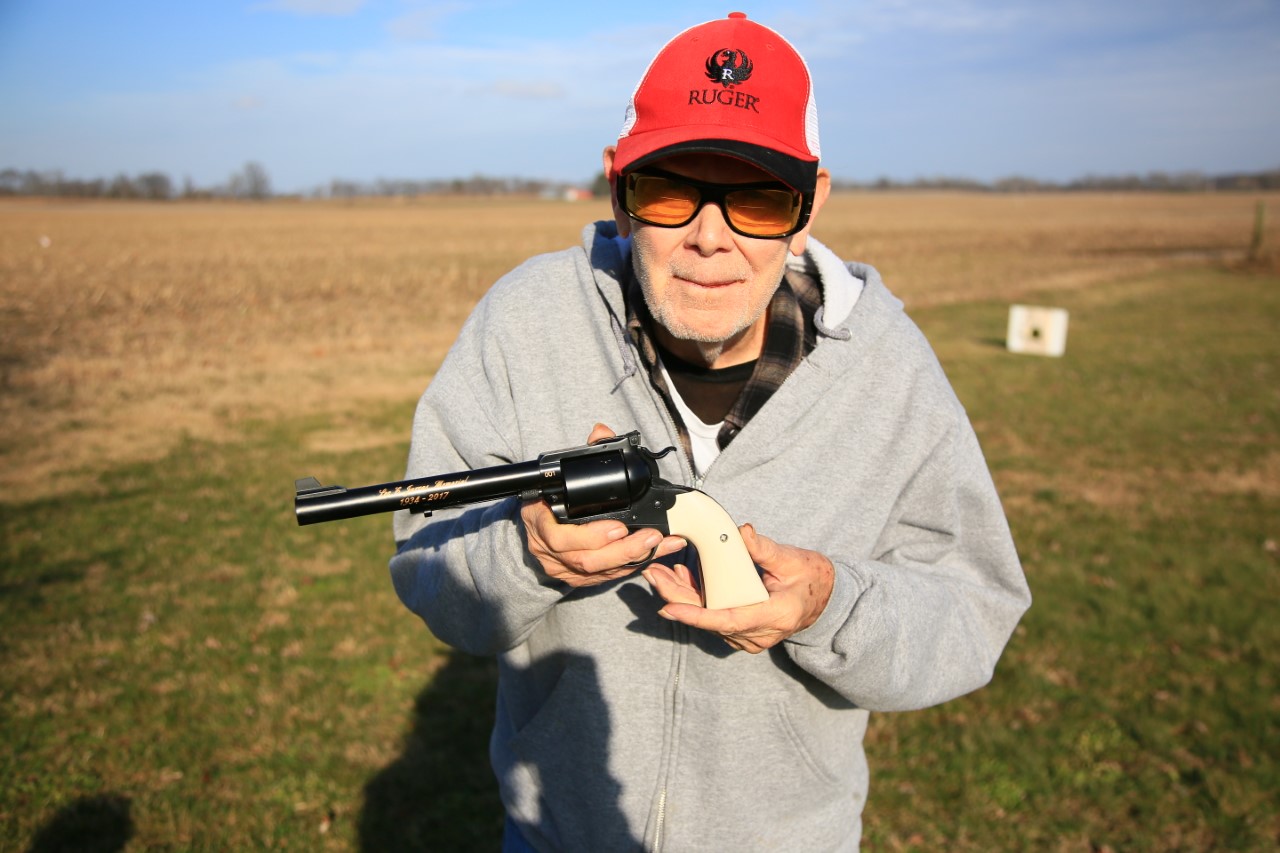 Our next HHC, Handgun Hunter’s Challenge is coming up soon. The next one is March 23rd thru March 26th. It will be at the Wilderness Hunting Lodge in Monterey Tennessee where it has been since 2007. It is a great place to hunt with almost 15,000 acres in 4 areas, from rolling foothills to straight up and down canyons. They have 25 or 30 species of animals to hunt from wild boar to African game. Want an exciting hunt, try Nilgai or African Watusi bulls, or Bison bulls. Australian Water Buffalo and Himalayan Yak are also available as are all the exotic deer and sheep. Whatever you choose you will have a great time. The food is great and the friendship even greater. We still have nearly 2 months before the hunt. Plenty of time for you to sign up and join us. If you would like to do so, call Sandy at 931-979-4050 and sign up. The prices are about half of what all the other preserves change and there are no hidden charges. No guide fee, no lodging fee, no charge to feed you. Just one basic low price. Here are the hunters we have signed up for the HHC so far…

We normally have 35 or so hunters at the March HHC so there is plenty of room for you, and like some of the folks already signed up, bring along a son or daughter or a buddy or two. If you do call Sandy and sign up, e-mail me and let me know to add you to my list so I don’t overbook.

Another hunt coming up soon is our next African hunt. This one is slated for may 29th thru June 8. I have been to Africa 11 times and hadn’t planned on going again, But when Trump won the election I didn’t feel too bad about leaving the country for a week. If Clinton had won, I wouldn’t have even thought about it. But I am looking forward to this. It has been 9 years since my last African safari and it gets into your blood. We have 12 people signed up and of them only one has ever been to Africa before and that is Rick Sim, who went on 2 of my African hunts with me. The hunters that are signed up are…

I actually have 1 opening left and if you would like to join us, there is really only one thing you must have and that is a passport. We are right at 4 months from leaving for Africa and it takes 6 to 8 weeks to get our firearms permits taken care of. It also takes 2 weeks to get the packet of paperwork to the people that take care of the permits. We have to go to the custom’s office and register the guns we are taking with us so that we can bring them back in the states. So all in all there is not much room for any problems with paperwork. If you would like to join us and you already have your passport, get with me at 928-527-4100 as soon as possible so I can get the paperwork to you.

There are a lot of new products to tell you about, such as a bunch of new AR-15s (amazing ain’t it?) Companies like Savage, Mossberg and several others are coming out with their own ARs. I just hope there is enough demand for them. A lot of new firearms to tell you about and I will go over them next time. Right now I need to go shovel some snow.

Until next time, take a youngster or lady shooting or better yet bring them to the HHC, they are our future.