Charlie Herf and his lion taken with the 257 Raptor,

Raptors compared
to the 257 GNR(right)

Left to right..240 Banshee, 255 Banshee on the left along with the 3 Raptor cartridges.

In mid 2010 I decided to continue our small caliber direction. Our Raptors had been very popular so i wanted to go one step lower. For this I chose the 22 Hornet brass. I necked it up to .243 and .257 and these became the 240 Banshee and the 255 Banshee. With our economy in the dumpster using a cartridge that uses a small amount of powder just makes sense. Both cartridges use the new 55 to 75 grain bullets that have come on the market recently. Velocities in the 2000 fps range are normal with some higher with the lighter weight bullets. Both cartridges are extremely accurate and have no recoil. For varmints, coyotes or even smaller bodied deer the Banshees do very well.

Here are some of our  cartridges and some others for comparison. From left to right...

256 GNR..this is a cartridge we developed for use in the Ruger Maximum stretch frame revolver. We have had large 450 pound wild hogs taken with this along with large deer. A great little cartridge and no recoil. Basically a 357 Maximum case necked to 25 caliber. Loading dies and data are available.

Next is the 45 Long Colt for comparison to our next cartridge.

This is the 455 GNR. Compare it to the 45 long colt to it's left. Much more powder capacity. It will equal the 454 with considerably less recoil. Basically a 475 Linebaugh case necked to 45. Dies and data are available.

This next cartridge is our 375 GNR. It is chambered in the stretch frame Ruger Maximum revolver. Makes a great big game long range cartridge/revolver combo. Great for elk size critters. Basically a 445 Super mag case necked down to 375. Dies and data are available.

This our 440 GNR Magnum. This one is chambered in the Encore and in Marlin 1895 rifles plus Ruger #1 rifles. It is for the big game hunter who likes the 44 caliber bullet. Considerably more power than the 444 and nearly as much as the 458 Win. Magnum. Basically it is the 50 Alaskan case necked down to 44 caliber. Dies and data are available.

Now we get into our really big cartridges. This is our 586 GNR. This cartridge shoots a 550 grain bullet at almost 2000 fps. It is a 577 Snider case with a slight shoulder on it. This one is built on the Ruger #1 rifle. Dies and data are available.

Now the biggest of them all, our 610 GNR. This monster killer is based on the 577 Snider case, which is readily available, necked up straight to .620 caliber. It shoots a 550 grain bullet at 1900 fps. More power than the 460 Weatherby cartridge but the recoil of a 12 gauge magnum shotgun. This one is chambered in the Ruger #1 rifle. Dies and data are available.


Over the past couple of years we have come up with several new custom cartridges, bringing the total to over 40 of our own wildcat cartridges.  Many of these have been around since the late 70's and early 80s and have been shown on our web site and brochures since then.  Some are described above. Here are descriptions of some of the others.

224 GNR
At the bottom of the our list is the 224 GNR.  This varmint cartridge is simply a 357 Maximum necked down to 224.  The velocities will run right along with the 222.  Intended for the Contender, it is also available in our stretch frame revolver.

7 GNR
Next up is our 7 GNR, one of our most popular and easiest to make.  This one is formed by shooting 7X30 in it's chamber.  The 7 GNR was not intended as an improvement on the 7X30 as it was developed 2 years before the 7X30 came out.  In fact we used 375 Winchester brass when we first developed  it.  We eventually switched back to the 30-30 brass as it was a better choice. The 7 GNR will almost match the 7mm Mauser when shot in a 15 inch barrel.  In a 14 inch Contender it will do an honest 2600 fps with a 130 gr. bullet.  Great for deer-sized critters and great at long range.  Any 7X30 Contender can be rechambered to 7 GNR.

280 GNR
This cartridge puts a 140 grain 7mm bullet at an easy 2800 fps. A great cartridge for long range deer and antelope. Based on the 405 brass, this one was developed for the Encore handgun but works even better in the encore rifle. In the 24 inch Encore barrel, this one will almost match the 7mm Magnum. Dies and brass are readily available. 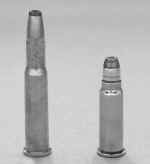 This is our 300 GNR.  This one is simply a shortened 30-30 and intended for revolver use.  We took the old 30 Herrett and shortened it 1/10 of an inch and made the case a bit straighter and the shoulder a bit sharper.  This one will put a 110 gr. JHP out of a 7 inch barrel at 2200.  No set back problems with this one either.  Can be rechambered from a 30 Carbine Ruger.

Next up is a virtual duplicate of the 7 GNR except it is in 30 caliber.  The 30 GNR is an improvement over the 30-30 Improved.  It is formed by shooting the 30-30 in it's chamber.  Equal to the 300 Savage, it is great on deer-sized critters.  Any 30-30 Contender or rifle can be rechambered to this cartridge.

310 GNR
The 310 GNR. Ballistically between the 300 H&H and the 300 Winchester magnum, this one was intended for large game up to elk and excels at this. Extreme long range handgun shots are now possible with the new 310 GNR. and even longer shots are possible with the Encore rifle. Based on the 405 brass, dies, brass and loaded ammo is readily available.

The 338 GNR is one of my favorite. I've used this one countless times in Africa and in Australia on 600 to 800 pound critters.  In Australia the feral donkeys, which are the size of a large mule, fall to one shot almost every time. It is formed from 405 Winchester brass by simply necking it down.  This one will put a 210 gr. bullet our at 2400 fps. The 260 gr. Partition does extremely well on elk size critters.

358 GNR
Next up the ladder is our 358 GNR.  This one is intended for big game and has taken a lot of it through the years.  It is a 445 SuperMag necked down to 358 and comes very close to 35 Remington ballistics.  Does well in stretch frame revolvers and in Contenders or encores.  Any 357 Mag or 357 Maximum Contender can be rechambered.

375 GNR
Our 375 GNR is next in line and this one was intended for the Contender and encore and for stretch frame revolvers.   It is formed by necking down the 445 SuperMag to 375.  It will pretty much duplicate the ballistics of a 375 Winchester in an Encore.

The 378 GNR.  This one is for big and dangerous game.  It will put a 300 gr. bullet out of a 15 inch barrel at 2100 fps.  Several elephant and numerous cape buffs have gone down to this cartridge.

Next is our 401 GNR. Using the .400 caliber bullets this one is an easy shooting round with plenty of punch. I personally use the 180 grain to 200 grain gas checked hard lead 38-40 bullets in this one. On a recent hunt the 200 grain hard cast bullet plowed completely thru a large hog side to side for an instant kill. This is a 44 magnum brass necked down to .400. Very much like the 41 GNR in looks and power.

Still in the 41 caliber but a bit larger is our 416 GNR. ( It is on the left with a fireformed cartridge in the center.  The cartridge on the right is 450 GNR - see below)  This one is form from 348 case full length necked up to 416.  I have used this one considerably in Africa on large game.  It puts a 350 gr. bullet out at 2300 fps and is best in an Encore. Recently Bill Firman took a large elephant with the 416 GNR in Africa.

Next in the Dangerous Game category is our 450 GNR.  We developed this one back in 1991 for a safari scheduled in Africa the next year.  It has repeatedly taken Cape Buffalo and at least 4 elephant that I know of.  It is about 5% under the 458 Win Mag and does best in the Encore.  This one is a 348 case necked up to 458.

In Dangerous Game cartridges the best of that league is our 450 KNR.  This one was developed by my son Kase back in '91 and is a 470 Nitro case necked down to 458.  It is a real thumper on both ends.  Mainly rechambered in Ruger #1 rifles from a 45-70, it is now popular in the Encore handgun and is a real handful.

Next is our 457 GNR. This cartridge was designed to be a very powerful revolver round for dangerous game. It is based on the 475 Maximum case necked to .458. It is also chambered in encore barrels. This one will duplicate 45-70 rifle ballistics in a 7” revolver.

This 375 grain LBT went thru 4 hindquarters of a large range bull. It went thru hip to hip on one bull hanging and then on to the second bull and thru both hips on that one and then hung up in a pile of fresh hides. It expanded to almost the size of a quarter. Both bulls were probably 650 to 700 pounds, so it went thru a measured 7 feet of meat and bone and 2 inches of stacked fresh hides.

Dies for all the above cartridges are available from us.  Loading data is enclosed with the dies.